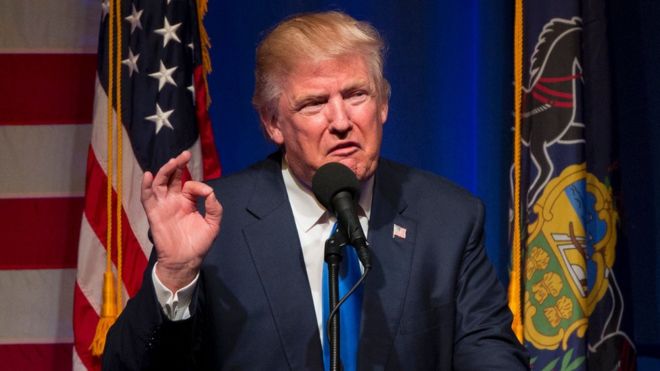 US President-elect Donald Trump has said he is open to leaving intact key parts of President Barack Obama’s healthcare bill.

Mr Trump, who has pledged to repeal the 2010 law, said he will keep the ban on insurers denying coverage for pre-existing conditions.

He told the Wall Street Journal that he also favoured allowing young adults to be insured on their parents’ policies.

“I like those very much,” Mr Trump said of the two pillars of the bill.

It was his meeting with Mr Obama on Thursday that had made him reconsider his calls for an all-out replacement of the Affordable Care Act, he told the newspaper.

Asked whether he would implement a campaign promise to appoint a special prosecutor to investigate his defeated Democratic opponent Hillary Clinton over her use of a private email server while secretary of state, Mr Trump said: “It’s not something I’ve given a lot of thought, because I want to solve healthcare, jobs, border control, tax reform.”

Meanwhile, protesters angered by Mr Trump’s election gathered in several US cities for a third night on Friday. Thousands took to the streets of Miami, Atlanta, Philadelphia, New York, San Francisco and Portland, Oregon, voicing anger at the president-elect’s comments about immigrants, Muslims and women.

Police in Portland are investigating the shooting and wounding of a protester on a bridge where anti-Trump demonstrators were marching. Officers had earlier used stun grenades to disperse a crowd of hundreds of people in the city centre.

In a separate interview with CBS, Mr Trump said the parts of Mr Obama’s healthcare bill he was “going to try to keep” were “the strongest assets”.

He said that while the bill would be repealed and replaced, the changes would provide Americans with “great healthcare for much less money”.

He made the statement during an interview with the 60 Minutes programme, which is due to air on Sunday.

“Repeal and replace” – with emphasis on the former over the latter – has been the Republican mantra when it comes to Barack Obama’s healthcare reform for the past six years. Candidate Donald Trump echoed this when he labelled the programme a “disaster” and promised something much better if he were elected president.

Just days after the US public gave Mr Trump the keys to the Oval Office, however, he said there were parts of Mr Obama’s signature legislative achievement worth keeping.

The challenge for the president-elect is that the Obamacare features he praises – such as its mandate that insurers cover pre-existing medical conditions – are made possible by portions of the law he has condemned, like requiring all Americans to obtain insurance.

Keeping the law’s carrots while abandoning its sticks could prove difficult.

Complicating the matter is that a “revise and reform” effort may not fly with Mr Trump’s ardent supporters and the cadre of arch-conservative politicians in Congress, who want to tear up the law “root and branch”.

Mr Trump often broke with Republican orthodoxy while campaigning and didn’t pay a political price. He may learn that as president he won’t get far without his party establishment’s help.

During the election campaign, Mr Trump said the government-run health insurance marketplace was “a total disaster” and “a catastrophe”.

“Obamacare is just blowing up,” he said only last month, while promising his own plan would deliver “great healthcare at a fraction of the cost”.

While running for president, Mr Trump did not offer much detail on what he envisaged would be Obamacare’s replacement.

His apparent change of heart on Friday comes amid a surge in applications to join the plan from Americans possibly fearful it is about to be overturned.

More than 100,000 applicants snapped up Obamacare health insurance on the day after Tuesday’s election, this year’s biggest sign-up, the Obama administration announced.

About 22 million Americans would be without insurance if the law was repealed.

Congressional Republicans have voted more than 50 times to undo the law.

Though the Republicans have maintained control of the Senate, they cannot repeal the Affordable Care Act in its entirety because under Senate rules, the Democratic minority remain in a position to block the move.

The Republicans could, however, starve parts of the bill of funding through a budgetary process called reconciliation.

The law has not been without its difficulties.

Last month, the Obama administration said the average cost of medical coverage under the bill was expected to rise by 25% next year for those Americans who do not qualify for subsidies.

And about one in five consumers would only be able to pick plans from a single insurer, it added.

Former President Bill Clinton last month called the unsubsidised portion of the law “the craziest thing in the world”.

In the US – unlike in many other Western countries – private companies, rather than the government, provide health insurance for most citizens.

Meanwhile, the Obama administration has suspended its efforts to win congressional approval for a Pacific free-trade deal before Mr Trump succeeds him in January.

The deal covers mostly agricultural products and involves 12 countries around the Pacific, but not China.

Officials said that after eight years of negotiations the fate of the deal, known as the Trans Pacific Partnership, was in the hands of the next administration.

Mr Trump has criticised the accord, describing it as a disaster which would send more jobs overseas.

BBC business correspondent Joe Lynam says a collapse of the agreement would be likely to increase Chinese dominance of the region and damage America’s global reputation.